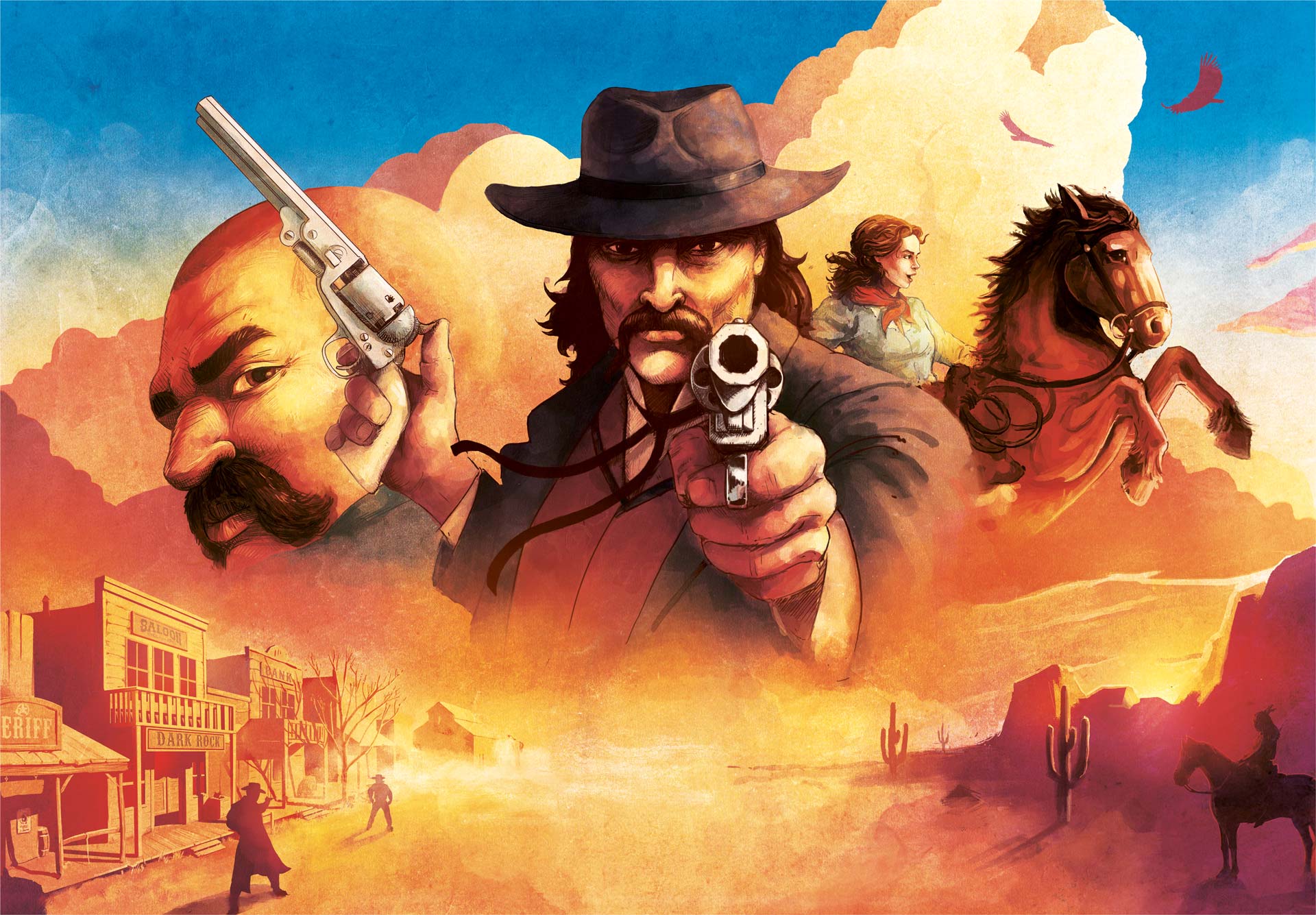 SKU: KOL-WES-001-001 Categories: All, Western Legends
Read more
Historic characters from the American Wild West face off and write new legends across the face of history! Gather your gun, your mount, and your grit as you forge your path into the history books. Western Legends is an open-world sandbox tabletop adventure for 2-6 players set in the American Wild West. Players assume the roles of historical figures of the era, earning their legendary status in a variety of ways: gamble, drive cattle, prospect for gold, rob the bank, fight bandits, pursue stories, become an outlaw, keep the peace. The possibilities are darn near endless. Each player's turn starts with drawing poker cards and/or gaining cash. Then they choose three actions. Possible actions include: move on the map (how far depends on whether they have a mount), doing a location-specific action (such as mine for gold if they are at a gold mine, gamble if they're in a saloon, etc.), fight other players at the same location (either duel them, rob them, or arrest them if they're wanted), play poker cards that have action abilities, etc. Legendary Points (LPs) are earned based on the outcomes of many of these actions, and the winner is whoever has the most LPs at the end of the game. Key Points - Award-Winning gaming experience set in the American West! - Beautiful artwork, and presentation brings this highly thematic game to life. - Intuitive gameplay and choices let’s you write your own legend every game!

The Good, The Bad, and The Handsome

From the creative mind of Hervé Lemaître, players will enjoy a highly narrative and interactive experience, choosing a life of crime as a Wanted character or justice as a Marshal. Western Legends features historical characters from the American old west brought to life with the beautiful illustration work by Roland MacDonald.

In Western Legends, players can rob the bank as Billy the Kid, evade the sheriff as “Doc” Holliday, or rustle cattle as Calamity Jane. In the end, the objective is to go down in history as the most legendary figure of the time.

Over the course of the game, players will need to react to random events, complete jobs and objectives, and equip themselves to survive. Purchase a mount, weapons, and other items necessary to get through the troubled times in one piece. Mine for gold, wrangle cattle or hold up other players. You can do it all in the open sandbox environment laid in front of you!

Your actions determine where you fall in the eyes of the law.

Players will enjoy having multiple paths to victory and a diverse set of characters and options to choose from, ensuring that no two games will ever be the same. Additionally, the game features incredible miniatures, custom sculpted by Pure Arts Studios. While there is plenty of content in Western Legends, players will find rules and gameplay to be simple and straightforward.

Whether you choose the path of a wandering gunfighter, a small-town sheriff, or a successful lawman planning to retire, only one player will emerge as Legendary!

Fistful of Extras contains 20 stretch goals worth of content unlocked during the Kickstarter campaign held in January 2018. Included are new miniatures and new characters with goals providing more role variability. Also, more items to choose from at the General Store. Ride further into the wild west with more story cards allowing you to expand and immerse yourself in the world of Western Legends.